Me and Mazie (Dog as a Reflection of Oneself) 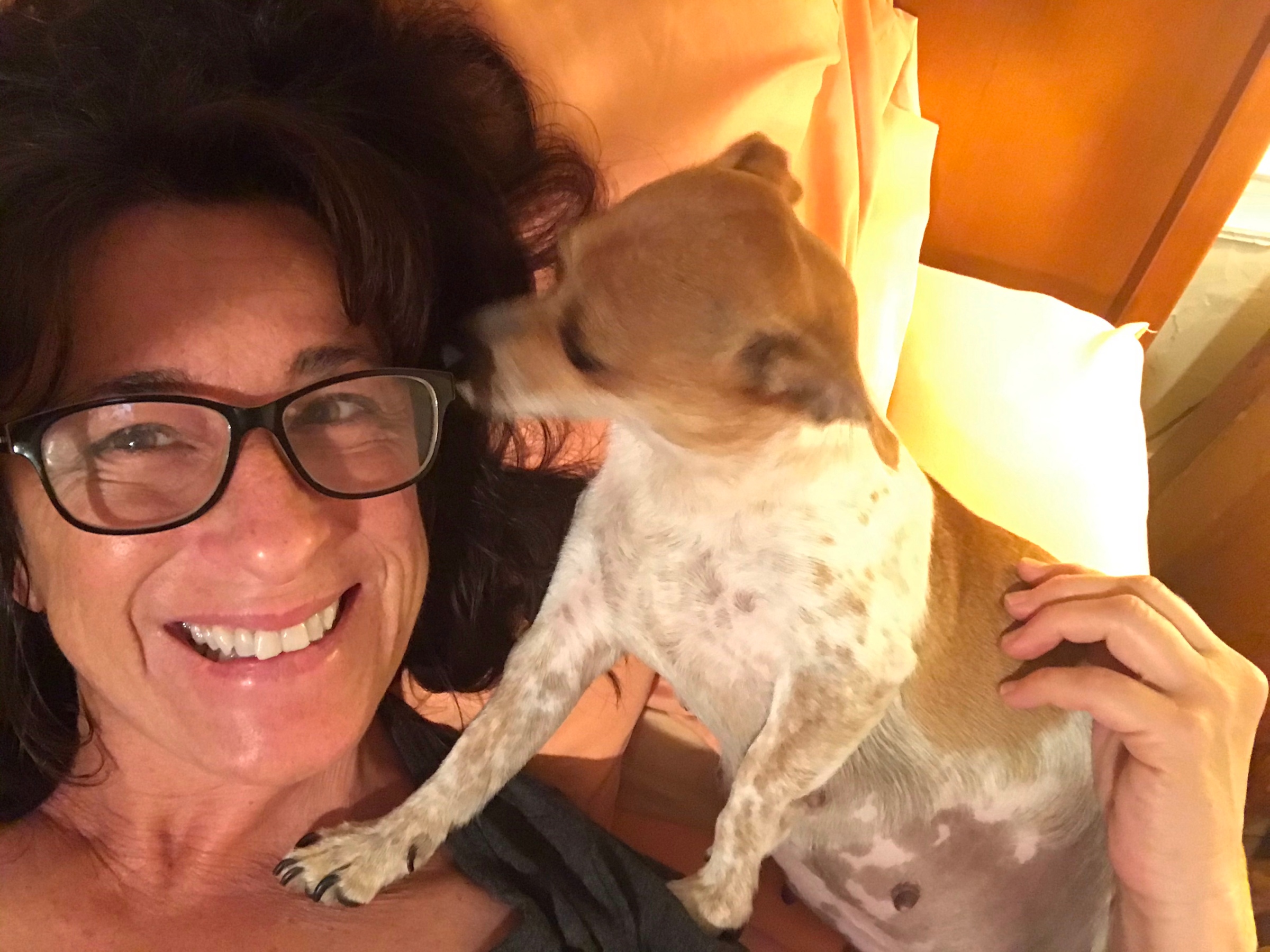 Mazie is not the cutest dog I’ve ever seen. I mean, she’s adorable, absolutely. But not the cutest. Her proportions aren’t quite right. Obviously, she’s not a show dog. She’s a mutt. She has a long neck and a long nose (like me) and small ears. And beautiful big black eyes with prominent brows that she sometimes furrows, making her look pensive or sad. Other times, she curls her mouth. A kind of Mona Lisa secret and quirky smile.

When I stopped by the rescue foundation last week, there was an insanely cute 5-month old puppy scampering about. OMG! I was smitten. She was perfect! I dropped to my knees and wanted to scoop her up. But only for a moment. I definitely admired her. I was happy just seeing her exist. But she wasn’t my Mazie. Cute as that dog was, she wasn’t the dog for me. I still want my Mazie.

Research shows that people do tend to choose dogs that, at some level, resemble themselves. We’ve all seen this. Dogs and their humans who look hysterically similar. But did you know that researchers also  discovered that the front view of cars tend to resemble their owner? And the cars even resembled the owner’s dogs when they were purebreds. Bet you never expected that!

Ultimately though, I think it’s more about matching personalities. You know those dogs that love to run? The ones that have endless energy and can be seen next to their humans on the trail, seemingly never getting tired? Yeah, that’s not my dog. That’s not me.

The first dog I adopted on my own was Dixie. Dixie was rescued in New Orleans after Hurricane Katrina. She was only ten months old when the storm hit. Thrown out into the big scary world, separated from her family, forced to survive on her own. And she was exactly what I was looking for. A mid-sized dog, about 45 pounds, a husky-chow-lab mix, white with caramel tipped ears and a tail that curled. She was social and playful with other dogs but had zero interest in sharing her home with another furry friend. She could entertain herself for hours. Sit on a snow bank and toss her toy in the air or sit under the tree and watch the world. Perfectly content. We were living in Idaho then. In the Wood River Valley. Famous for skiing and hiking and mountain biking, fishing and hunting. Anything you can do outside, people do it. And they do it with their dogs. That’s why folks live there. Except me. I lived there because it was beautiful. It was peaceful. It was enough for me to walk in nature and hike just a bit. Nothing too taxing. Dixie was happy with that too.

The real give-away that she was my dog, however, was at bedtime. Dixie liked sleeping in the front room, on the floor by the couch. This was when I was so happy to be sleeping alone again that I even bought a full-sized bed, downgrading from a queen, because I had no intention of anyone sleeping next to me. And when someone did, I wasn’t inclined to cuddle. Dixie was the same. In the morning, she would come when I called and allow me to say hello and scratch behind her ears. And then she’d leave. Not sentimental one bit. I loved that about her. And I was devastated when she died suddenly.

I always say it took two dogs to replace Dixie: Athena and Leo. Athena is a heeler-boxer mix. A sleek redhead with a white chest and white paws and a crooked tail. Leo is a crème-colored lap-sized mutt. Looked like a miniature Golden Retriever until he got groomed. And always looks like a puppy, no matter how many years go by. As a Pisces, I like to think they represent two aspects of my personality, swimming in different directions yet intimately connected and balanced.

Athena is the homebody, preferring to stay in her crate while Leo explores. Leo is Hermes, always on the move, always into mischief. He’s the charmer. Athena is the protector. Leo is curious. Athena is cautious. Leo is quick to take off, quick to wander. Never worried. Countless adventures and a lot of close calls, but it always works out, he never comes to harm. Athena is reticent. She’s interested, but not enough to take risks. She stays close and never wanders. She’s loyal. And fierce if she needs to be. They’re both over 12 years old now and still live in Idaho with their dad. Leaving them was one of the hardest things I’ve ever done. But they’re happy there. Taking them with me when I moved would have been selfish. Instead, I visit. I get regular photo updates. And I grieve. I miss them terribly.

I swore my next dog would be non-allergenic. And portable. Small enough to carry on a plane. Maybe a toy poodle. Smart and cute, with curly hair. But choosing a pup is a bit of a misnomer and a mystery. There’s some magic at play when a dog comes into your life. And I’m not sure how much we actually “choose.”

Mazie’s eyes looked back at me on Petfinder and, well… it’s almost cliché… She needed me as much as I needed her. Yes, she is small. But she’s not hypoallergenic. Of course, I think she’s smart, but she’s not revealing much these days. She’s still recovering from her rescue. From being one of so many. She’s still finding her voice. Learning to trust. Disinclined to socialize. But I have a feeling that will change with time. She doesn’t mind her harness, but she hates the leash. (I can relate.) It took over three weeks of sitting on the porch, sniffing the air, and taking in the view before she ventured down the stairs for a brisk walk. Just like me in Covid19 quarantine. Now she’ll walk daily, but she’s not inclined to go far. She prefers to sit and observe. To roll her back in the grass. To pant in the sun. She growls but doesn’t really bark. She’s a hybrid of sorts: a mixture of my last two furbabies. The size of Leo and the face of Athena. But more than that, more symbolically, I think the different aspects of myself are finally coming together.

Mazie is pregnant. I knew that when I got her, but you couldn’t really tell. Now her belly is big and you can see the puppies moving. Any day now, any hour, she’s about to give birth. She’s creating something new. There’s a metaphor there for me too. Magic is afoot. New life beginning. At the moment, still mostly in hiding. But it’s coming. So we’re preparing, as best as we can, and we’re napping. Napping a lot. Birthing is hard work. Whatever comes will be demanding. Exhausting. And exhilarating.

Me and Mazie. Reflections of each other. Just like every fur-friend I’ve ever had. Together on this journey called life.