White Lutheran Memories of Racism in the 1930’s Midwest 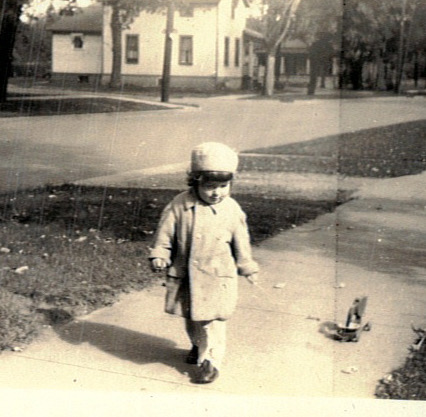 My mother was born in 1934 and would have been 87 years old next month. A few years before she died, she started writing down her memories of home as a kid. The following seems fitting to share before February is over. The cultural ignorance and accepted White narrative of the past is not acceptable today. I think inherently she knew that even when she was young. And yet, there it was, and she was a part of it. These memories will make you cringe.

Our homes shape us but they do not need to define us. By the late 1960’s, my mother was marching for Civil Rights. In various ways, she challenged the Lutheran Church to acknowledge and denounce racism. In this, she went against the norm. The Church was the home of her faith and a large part of her identity. She recognized her participation in the problem and strove to do better as an adult. As Maya Angelou said, “Do the best you can until you know better. Then when you know better, do better.”

Here are my mother’s memories of growing up in Saginaw, Michigan in the 1930’s and 40’s:

We only went into the Fourth Ward for two reasons.

The Fourth Ward was the Black Ward in Saginaw. The “Negro” Ward we called it in the 1940s. All the Negroes in town lived in it.

It was directly north of downtown. On the East Side. A street that turned into the main highway between Saginaw and Bay City went through it. We called it the “River Road” because it followed the Saginaw River up to Bay City.

As I said, we used that road only for two reasons.

One was to have a picnic along the Saginaw River north of town. There were picnic grounds for miles and miles along the river and we used them some Sunday afternoons.

To get to the picnic sites along the Saginaw River, we had to drive to downtown on the East Side, and then north through the Fourth Ward. And as soon as we entered the ward, my father would tell us to lock our doors and roll up the windows. Negroes, or “Darkies,” had knives. They may not use them, but all males had them. In a time when carrying any weapon was limited to criminals, this was a frightening thought. So we never drove through the Fourth Ward with a window open—no matter how hot the day.

The housing in the Fourth Ward was run down—old, unpainted, rickety apartment buildings and houses. Yet the blacks on the street were dressed to the nines. The contrast was exceptional. In my naivete, I could not understand why Black men and women spent money on clothes rather than fixing up their homes.  Why did they dress up in finery and parade back and forth down the main street?  They didn’t walk, they pranced. From my closed car window, I was in awe. These people looked so happy. They greeted each other with big smiles, outstretched arms, and hugs. Yet how could they be so joyous? They lived in dirty poverty. I didn’t understand it.

One trip through the ward, I asked my father why the people lived in such terrible buildings. Why didn’t they fix them up?.  He said, “They aren’t allowed to live in white people’s neighborhoods, Alice.” He didn’t give a reason, but I figured it out.. “Why fix up buildings that you can never buy?” Why, indeed?

No one I knew ever called African-Americans “Niggers,” but “Darkies” was ok. They were dark; they were different. They couldn’t get the same jobs as white people, so they couldn’t earn as much money. It would be a waste of money to “dress up” the houses they rented. The only thing they could dress up was themselves. They could look good!  And they did. The ward seemed like another world.  People living in abstract poverty, but dressed  to impress. Each other. I could only gawk.

The other reason we ventured into this ward was to buy shoes.  A few blocks north of downtown was a very, very old shoe store.  The building was 19th century, and no doubt the shoe store had been there long before the ward turned black. White people continued to venture into the ward to buy shoes. But I never saw a Black in the store.

Although we never called Blacks “Niggers,” the word was elsewhere in our vocabulary.  Brazil nuts were “Nigger toes.” Black baby-shaped gumdrops were “Nigger Babies.”  And we chose up sides for a game or jumped rope to the rhyme:  “Eene, meenie, minie moe.  Catch a Nigger by the toe. If he hollers, let him go. Eene, meenie, minie moe.”  Did I say we couldn’t use the word Nigger at home, school, anywhere? Wrong. We could, and did. We didn’t give it a second thought. This was true among Whites across America at the time.

In the 1930s and early 40s Holy Cross Church put on minstrel shows. My dad directed both the acting and the music. “Mr. Interlocutor” was white; all the other characters were black-faced. Mr. Interlocutor was the leader who stood in the middle of a horizontal line on stage and questioned the “end” men. The whole show was a series of jokes and funny stories passed between the characters. “Mr. Interlocutor?” a blackfaced character would say.  “Yes,” replied the white man. And so the conversation began. The humor was very much like the radio show “Amos and Andy” or black and white movies of that time that included Blacks. People laughed at the foolishness and ignorance of the black characters.  Only the white man, Mr. Interlocutor, was smart.

Minstrel shows also included special musical acts and choruses. Their words, too, usually poked fun at Negroes. Once, on a visit to Fort Wayne, I remember finding a piece of sheet music in my Grandfather Stolper’s piano bench titled, “If the Man in the Moon Were a Coon.” I was startled. It wasn’t funny. It was blatant racism. It had been written about 1908. But I never suspected that the Minstrel shows I saw as a young child were anything but funny. Al Jolson had made a career out of being blackface. A Jew, a son of a rabbi, was blackface and sang “Mammy” on Broadway.

There were no Blacks in our Lutheran school because none lived outside the Fourth Ward. (The Fourth Ward had its own school, with an all-white faculty.) And there certainly were no Jews at Holy Cross. Why would they attend a Lutheran school? They were in Arthur Hill High School, I’m sure, but I never had any idea who they were.  Frankly, I didn’t think much about Jews. My world was limited to my neighborhood, school, and church.

Stereotypes of Jews abounded. We were never taught that they were Christ-haters or that they could be blamed for Jesus’ death (our sins were the cause of that), but people said they might cheat you and so you should always be on guard. A racist expression people used freely then was “Jewing someone down”  It meant to trick someone into lowering their price—to trick them into giving more value than what was paid for.

We didn’t know any Asians, not even any Italians or Irish. But at the beginning of World War II, we became extremely racist regarding the Japanese—“Japs,” as they were called. We were afraid of them. They were monsters, barbarous torturers of American GIs. I had a coloring book of Japanese children before WWII began in which I had carefully colored a few pictures of girls in fancy dresses carrying parasols. After the war began, I decided to throw the coloring book away.  I couldn’t stand to look at it. But first I scribbled all the pages. I slashed all the beautiful pictures with bold black strokes! I was seven years old.

In the early 1970’s my mother wrote the following poem. It was featured in the monthly magazine of the Lutheran Church, Missouri Synod.

We began in black graphite for his color

and continued in red ink for his violence.

And we were most thorough.

from babes to aged

We gathered our evidence

and continued our condemnation.

Lifting our heads to heaven, we stood unbent.

“God, we thank you that we are not like him.”

And the Creator looked down

and saw no color

the black He created, the black we created

Theirs, ours, it was one to Him,

one cancer of maggots!

Some fool shouted, “But God,

Everyone knows we are better!”

But a wise man trembled…

And watching the heavens,

he waited the holocaust,

Blood that covered the black . . . the white.

“God, be merciful to me, a sinner.

Discolor!  Discolor us all!”

Be we walked indifferently into the pool

Never noticing THEY were there too.

We took His love graciously

And when it came time to pray,

“God, we thank You we are not like them.”

By this shall all men know that you are My disciples . . .